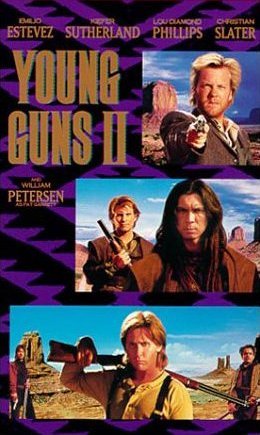 The film follows the life of Billy the Kid (played by Emilio Estevez), in the years following the Lincoln County War in which Billy was part of “The Regulators” – a group of around six highly skilled gunmen avenging the death of John Tunstall – and the years leading up to Billy’s documented death. The film, however, is told by Brushy Bill Roberts, a man who in the 1940s appeared claiming to be the real Billy the Kid.

While the film takes some creative license, it does show some of the main events leading up to Billy’s documented death, including his talks with Governor Lew Wallace, his capture by friend-turned-foe Pat Garrett, his trial and his subsequent escape in which he killed two deputies.

Jon Bon Jovi was asked permission to include the song “Wanted Dead Or Alive” on the soundtrack.  Bon Jovi didn’t feel the songs lyrics were appropriate; however, he was inspired by the project and resolved to write a new song for the film that would be more in keeping with the period and setting. He quickly wrote the song “Blaze of Glory“, and performed it on acoustic guitar in the Utah desert for the crew. “Blaze of Glory” went on to reach No. 1 on the Billboard Hot 100.  Jon Bon Jovi would go on to name his debut solo album Blaze of Glory (released as Young Guns II: Blaze Of Gloryin the UK), which included the eponymous single as well as other songs from and inspired by the film.

Jon Bon Jovi also made a cameo appearance in the film, as one of the prisoners in the pit with Doc and Chavez (he can be seen 28 minutes and 8 seconds into the movie).