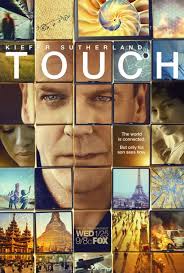 Touch is an American drama television series that ran on Fox from January 25, 2012, to May 10, 2013. The series was created by Tim Kring and starred Kiefer Sutherland. During its first season the series aired regularly on Thursday nights beginning March 22, 2012.  Thirteen episodes were ordered for the first season, with the two-episode season finale airing on Thursday, May 31, 2012. On May 9, 2012, Fox renewed the show for a second season.

The second season was originally scheduled to begin Friday, October 26, 2012, but was pushed back to Friday, February 8, 2013.

Martin Bohm (Kiefer Sutherland) is a widower whose young son, Jake, is living with autism and doesn’t speak. At the end of his rope over his inability to communicate with his child, Martin discovers that Jake is indeed communicating — but with numbers instead of words. Martin must decipher the meaning in order to connect the numbers to a group of seemingly unrelated people who affect one another in ways that are both seen and unseen. Martin gets help from a discredited, aging professor who offers an unorthodox theory about Jake and his rare ability.