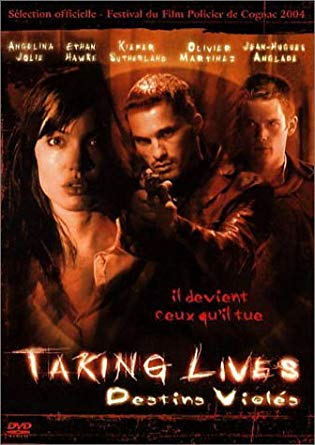 Taking Lives is a 2004 American psychological thriller film directed by D. J. Caruso and starring Angelina Jolie and Ethan Hawke. Loosely adapted from the novel of the same name, the film centers on an enigmatic serial killer who takes on the identities of his victims.

An insidious serial killer is impersonating his victims’ identities as he travels across Canada. A recent spate of murders in Montreal has brought FBI Agent Illeana Scott (Angelina Jolie) north to investigate. Scott’s unusual methods quickly earn the suspicion of the local police but bring her close to art dealer James Costa (Ethan Hawke), who says he was an eyewitness to the latest murder. Sparks develop between the two as Costa’s role becomes crucial in their effort to apprehend the killer.