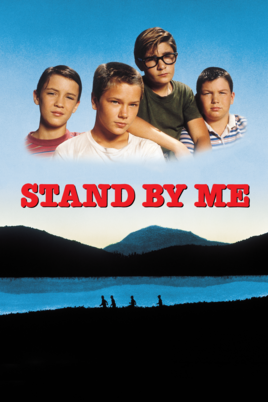 Stand by Me is a 1986 American coming-of-age film directed by Rob Reiner and starring Wil Wheaton, River Phoenix, Corey Feldman, Jerry O’Connell and Kiefer Sutherland The film is based on Stephen King‘s 1982 novella The Body. Its title is derived from Ben E. King‘s eponymous song, which plays over the ending credits.

Stand by Me tells the story of four boys in a small town in Oregon who go on a hike to find the dead body of a missing child. The film was nominated for one Academy Award(for Best Adapted Screenplay) and two Golden Globe Awards (for Best Motion Picture-Drama and Best Director, respectively).

Stand By Me – Facts

In March 1986, Columbia Pictures, concerned that the original title, The Body, was misleading, renamed the film Stand by Me. According to screenwriter Raynold Gideon, “…it sounded like either a sex film, a bodybuilding film or another Stephen King horror film. Rob came up with Stand by Me, and it ended up being the least unpopular option.”

The movie’s success sparked a renewed interest in Ben E. King’s song. Initially a #4 pop hit in 1961, “Stand By Me” re-entered the Billboard Hot 100 in October 1986, eventually peaking at #9 in December of that year.

Parts of the film were shot in Brownsville, Oregon, which stood in for the fictional town of Castle Rock. The town was selected for its small town, 1950s ambience.  The town fondly remembers the making of the movie in June and July 1985, in which approximately 100 local residents were employed as extras, and since 2007 has held an annual Stand By Me Day each July which has drawn international attendees

The rare movie that necessarily gets better with time

In 2016, several writers commemorated the 30-year anniversary of the film’s release. Rolling Stone‘s Charles Bramesco called Stand By Me “timeless,” “a staple of youthful nostalgia for its deft straddling of the line between childhood and adulthood,” and “the rare movie that necessarily gets better with time.”  Others described the film as a “coming-of-age classic”and as a film that stood at “the apex of the ’80s kids’ movie boom”.