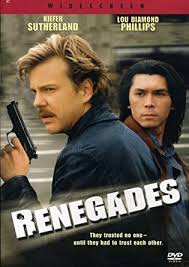 Renegades is a 1989 American action–crime film directed by Jack Sholder and starring Kiefer Sutherland, Lou Diamond Phillips, and Jami Gertz. It was released on June 6, 1989, by Universal Pictures.

While no-nonsense Philadelphia cop Buster McHenry (Kiefer Sutherland) is going undercover to investigate a gang headed by the ruthless Marino (Rob Knepper), he’s forced to take part in a robbery that ends with the theft of a sacred Sioux artifact and the death of several onlookers.

After the incident, Hank Storm (Lou Diamond Phillips), whose brother was killed during the robbery, teams up with Buster to recover the artifact and avenge his brother’s death.