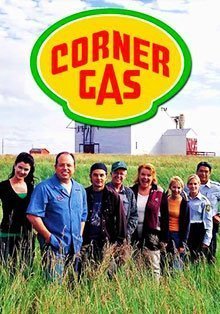 Corner Gas is a Canadian television sitcom created by Brent Butt. The series ran for six seasons from 2004 to 2009. Re-runs still air on CTV, CTV Two, and The Comedy Network.

Deriving its name from the roadside gas station in the fictional town of Dog River, Saskatchewan, Corner Gas is the only gas station for 60 kilometres (37 mi) in any direction. Brent Leroy (Brent Butt) is the proprietor of the station and Wanda Dollard (Nancy Robertson) works at the station’s convenience store as a retail assistant. An adjoining coffee shop, The Ruby, is owned by Lacey Burrows (Gabrielle Miller), who inherited it from her Aunt Ruby.