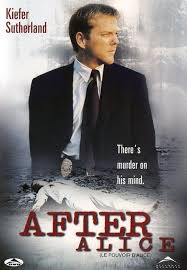 After Alice (also known as Eye of The Killer) is a 2000 mystery thriller directed by Paul Marcus and written by Jeff Miller. The film stars Kiefer Sutherland as Detective Mickey Hayden.

A brilliant serial killer has resurfaced after a 10-year hiatus, and the police put his original pursuer, Detective Mickey Hayden (Kiefer Sutherland), on the case — a dicey proposition, since the initial investigation turned Hayden into an emotional wreck.

Now, courtesy of a blow to the head, Hayden has acquired a supernatural sleuthing skill that aids his search for the psychopath while further scarring him: Whenever he touches new evidence, he can envision its owner.